We arrived to Manaus via Rio de Janerio on 13th September where we rested the first night.

Day 1 we all went to a small church called Mount Sion where 8 new people accepted Jesus as Lord also there were approx. 10 healing miracles.

Day 3 Sunday morning, at the church of Pastor John Nunes called Moderna where 3 accepted Jesus as Lord, there were many miracles including a woman who could not walk at all was totally healed, also a lady who was blind in 1 eye was also healed, a young child who was allergic to milk was healed and was tested with some milk on her arm and no rash appeared. A man would could not speak was healed and he also sung. 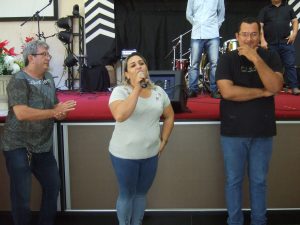 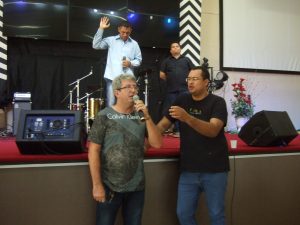 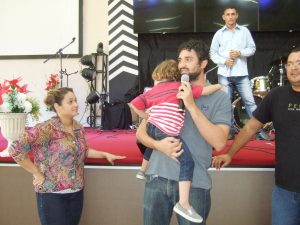 Sunday evening Helen and Myself went to the Church of Pastor John Bosco where 34 accepted Jesus as Lord, there were also 8 miracles

Day 4 Was a new outreach church where 34 accepted Jesus as Lord and 4 received a miracle.

Day 5 We all went to the church of John PP in this church 16 accepted Jesus also 16 received miracles of healing. A Lady who was prayed for 2 years ago who the doctors said it was impossible for her to get pregnant came and said she now had a 4 month old child

In the church where Helen & Julie ministered 2 accepted Jesus as Lord and 8 were healed.

In the church were Andrew & Myself ministered 32 accepted Jesus and 12 testified to being healed, including a lady with a very twisted spine like the letter Z.

A lady who suffered with Titanites was also healed

A lady with a breast tumour was also healed, she was in so much pain that she could not lift her arm

A man who could not bend his legs was also healed

This was on Friday night and it was a couples meeting at Pastor John Nunes Church, we did a Mr & Mrs Game show for all the couples.

Helen spoke at a ladies meeting with Julie.

In the evening we went to the all night vigil from 10pm on Saturday  – 6 am  Sunday morning.

I was the main speaker where there was approx. 10,000 people in attendance. 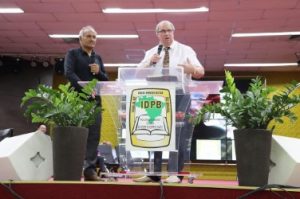 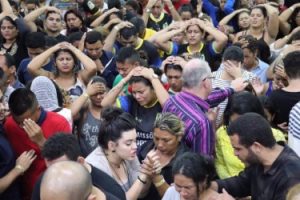 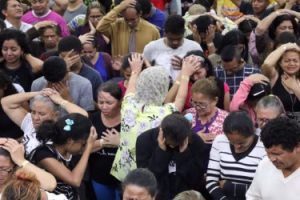 Over 6000 came forward for healed and deliverance.  Many demons came out of the people and over 800 were healed.

Sunday morning in Pastor Asif church 60 accepted Jesus as Lord and 12 were healed. 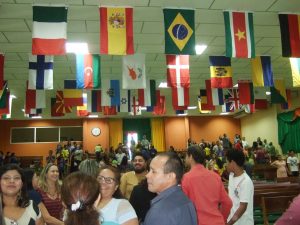 Next day we left our Hotel to travel into the interior first by car to the city of Itapiranga to the church run by Pastor Jason (Crocodile Dundee of the Amazon).

Next day we travelled to Urucara all were healed 46 people in total and approx. 26 people accepted Jesus as Lord. A lady was in a wheelchair and walked around the church. 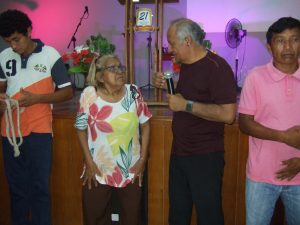 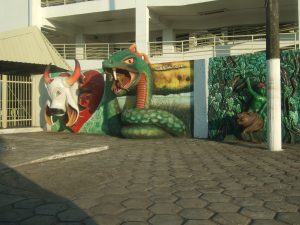 We went again by boat to Paritins this is the town where once a year people from all over the world come to visit the massive folklore festival, witchcraft is rife in this town, so understandably it was hard spiritually though 30 accepted Jesus and 6 were healed including a deaf-  mute  lady of approx 50 years old.

A lady with advanced breast tumour was healed 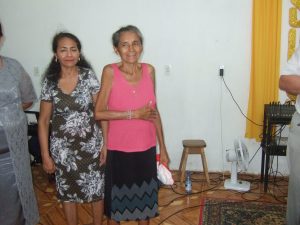 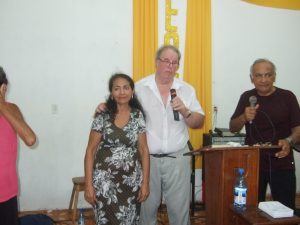 A lady who could not walk very well was also healed

We travelled by 2 boats to Oriximina where we would be 2 days, Helen ministered and 21 accepted Jesus for the first time and 9 received a miracle including a young girl who used to be party of the dance troop who had fell and banged her head leaving her blind and paralyzed only this night she started to walk aided by 2 men, so healing is returning to her.

This night was a wonderful night, people brought their friends to be healed and 13 accepted Jesus as Lord, 10 received miracles, including a blind man with a crutch which was thrown away. Also a lady who had been bleeding for 10 years trusting Jesus would heal her even her doctor said after 18 months that she should be dead, she was instantly healed when Helen prayed for her.

Another blind man who could not walk and was in a wheelchair was healed and very happy.

A lady who was blind was also healed.

We travelled by boat to Juriuti, 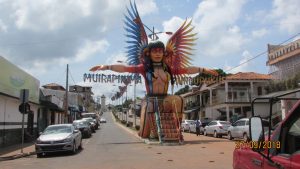 just in time for the night service. Julie spoke and 9 accepted Jesus as Lord, and 7 received healings. Next day was in the same city in the morning Helen spoke at a couples meeting and many received deliverance from their past relationships.

In the afternoon we went to another meeting at a different church, Helen spoke and approx. 20 accepted Jesus as Lord and there were many miracles, including a man who was blind and a lady who could not walk unaided 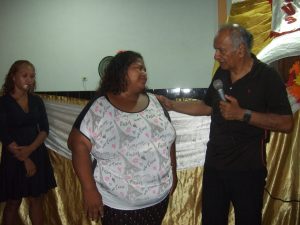 In the evening I spoke at the main church approx. 6 accepted Jesus as Lord and again many people gave testimony of their healings.

The next day was a long day of travelling from 8 am – 6pm on 3 separate boats as we got nearer to Manaus. We stayed at San Sebastion and quickly got ready for the night service.

I spoke and approx. 20 received miracles including a lady who was very happy as she could now stand and sit without pain.

Today was our last day in the interior at a city called Silves, we had to travel by car then by ferry boat to this Island. It was a very hot night and I found it hard to preach with no air conditioning. However, 19 accepted Jesus as Lord and 29 received miracles including a small

Girl with a twisted leg who could not walk straight.  Also, a lady with a large cancer in her stomach who was in pain was healed 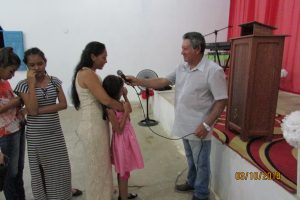 We had a day of rest then travelled through the night to Petropolis in Rio de Janerio state.

On Sunday evening we all went to the church of Pastor Vladimer, here 9 received miracles.

Next day it was a Pastors meeting where I was scheduled to address them all approx 50 Pastors, after preaching many Pastors received prayer and 10 were healed from various complaints. After this we travelled by car to our last destination which was going to be a 2 day break on the Copacabana Beach front Hotel before returning back to the UK.

We wish to thank all who supported this mission for their love and prayers also financial support.

Pastor David Measures is an international speaker and is presently the leader of The YTF Church (Yesterday Today and Forever) in Leicestershire, England. The Lord has used him in healing and deliverance and he has witnessed many people being wonderfully set free.

Pictures of people who have been healed.
Read More 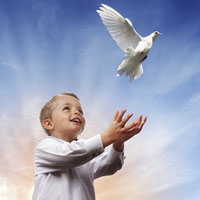 Words from people who have been touched.
Read More 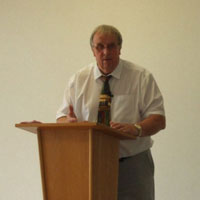